GEB is my favourite book. I am rereading it for about the fifth time at the moment. I’m gonna have to get my hands on Infinite Jest….

When I was out in L.A. recently, Rian and I had a great—if too brief—brunch, and afterwards we ended up stopping by a bookstore where he bought me Douglas Hofstadter’s (amazing) book Gödel, Escher, Bach.

Within minutes of opening it I realized two things: 1) this had the potential to become my new favorite book, and 2) this appeared to be thematically identical but oddly arguing in exactly the opposite direction of my erstwhile favorite book: Infinite Jest.

Both G.E.B. and Infinite Jest (in at least one reading) are fixated on the relationship between recursion and identity: both in their explicit content, and of course—because we’re talking about recursion and smart-aleck genius authors here—in their implicit form and hidden structure.

I suppose when I say “explicit” I’m probably referring a little bit more to G.E.B., because it’s maybe a bit less obvious finding those themes (or calling them explicit) in Wallace’s work. But, vastly simplifying here (and also focusing heavily on what was interesting to me), Infinite Jest is, in my reading, essentially a recursive circling around the existential horror of a worry that ‘self’ and identity are purely materialistic, self-defined, and infinitely recursive. The book opens with Hal locating himself (‘his self’) physically:

“I am seated in an office, surrounded by heads and bodies. My posture is consciously congruent to the shape of my hard chair. […] I am in here.” (bold/italic emphasis mine)

—and pretty much continues this self-locating search in various voices, transpositions, and inversions for the remainder of the text (“call it something I ate.”).

Then, mirroring this core project, the novel’s action is propelled around a central MacGuffin — the “entertainment” or the “samizdat” — a film so entertaining that viewers lose interest in everything else and are compelled to continually re-watch it. This always struck me as, essentially, a lethally recursive entertainment.

This samizdat—infinite regression on a lethal scale—is an early hint of Wallace’s perspective on recursion: it is (literally) associated with stagnation, paralysis, and ultimately death. Hofstadter’s view, as we will see, is quite the opposite.

Amusingly, as (badly-kept) inside jokes, both Infinite Jest and G.E.B. are also structured recursively. And I think the distinct manner of recursion for each is telling. (Note here that recursion need not be infinite. While endless regression is a danger of any self-referential system, it is not a defining quality. Self-reference can spiral inwards endlessly, or it can move forwards, in a sort of vibrating harmony, provided the system has a way of “bottoming out” or escaping its loops at some point.) Wallace admitted that Infinite Jest is based on the structure of a Sierpinski Triangle, which is a diagram that contains within itself an infinite number of copies of itself. The structure is actually fractal, which means it’s of the infinitely regressive variety of recursion. Hofstadter’s structure for G.E.B. is also recursive (i.e. self-referential), but not infinitely so. Its overt structure is fugue-like, alternating rigidly between a series of humorous dialogues between Achilles and the Tortoise and a series of formal descriptions of those same themes raised in the dialogues (a bit like A B A B A B … , but with a sort of forward momentum; so more like 1A 1B 2A 2B 3A 3B … or something). In addition to this overt structure in G.E.B., many of the sub-sections and dialogues take on a sort of local formal recursion (like a dialogue whose internal structure implicitly mirrors the explicit conversation subject, or even sentences that formally illustrate their own subject matter).

I think these two distinct formal codings of recursion in Wallace and Hofstadter give an interesting clue to each works’ larger themes and tones, hinting at what recursion meant for each of the authors. Both writers are clearly fascinated by self-reference and self-awareness (and the possible causal relationship between those two). But while for Hofstadter the recursive process of ‘strange loops’ is exciting and positive and generative (and even perhaps self-generative), for Wallace recursion—while fascinating—is consuming and negative and destructive (and even perhaps self-destructive).

Here’s typically insightful and hilarious Wallace talking about self-consciousness in an interview:

As a visual metaphor, I think Wallace’s idea (and fear) of self-destructive recursion can be seen in the old symbol of a snake eating its own tail: 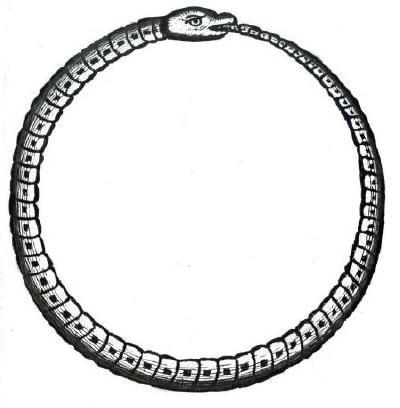 While Hofstadter’s idea (and love) of self-generative recursion is best seen in M.C. Escher’s drawing of two hands drawing each other:

Partly I love these two books simply because I’ve always been fascinated by recursion (I clearly remember ‘inventing’ Zeno’s paradox as a child at night in bed thinking of eating a licorice (or, rather, half a licorice, and then half again, and then half of that, ad infinitum — infinite licorice!) and then discovering in college decades later that some Greek guy beat me to it). But apart from that interest, I think I really love both books because I have this overwhelmingly concrete sense of loving both authors, and not just their writing. Which has led me to form a working theory that perhaps a certain highly-developed sense of self (a self sensing the world, a self sensing that there is a self sensing the world, a self sensing a self sensing a self…) as a person, and then the resultantly clever/humorous/penetrating/absorbing self-reference in writing, leads to a feeling of being more “alive” or “honest” or “generous” or something — at least in experience with friends and writers.

Error: Twitter did not respond. Please wait a few minutes and refresh this page.